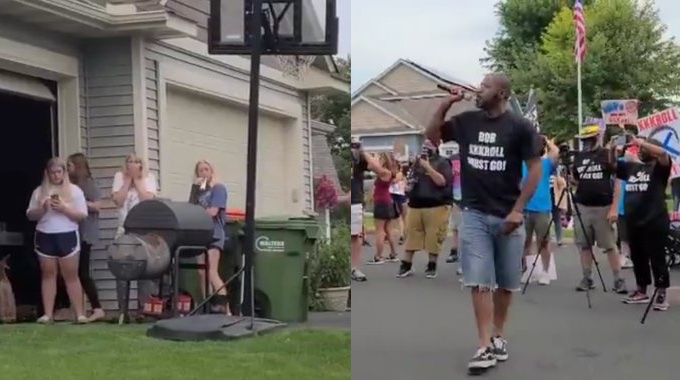 Don’t look now, but the incensed mob that had been terrorizing America’s blue cities has begun to move into the outskirts of the city, and now, in some places, they seem to be taking their tactics to the suburbs.

Earlier this week we saw videos of Black Lives Matter ‘activist,’ (some would call them provocateurs) terrorizing up and coming neighborhood in Seattle:

This is what antifa do to people they encounter in the street. Watch them assault and hit a man walking away from the antifa riot in SE Portland. They bring bats precisely for this purpose. #PortlandRiots #antifa Video by @VenturaReport. pic.twitter.com/AfxmVHHk6K

I think we are all used to seeing crazed BLM protesters and trouble makers burning buildings, looting, rioting, threatening people with whom they disagree politically, ie: using traditional Marxist tactics.  However, I was yet to see many candidates for office go on unhinged racist rants, going so far as to say ‘F***’ … a city in their home state.

If we had not seen it before, you are about to as The Gateway Pundit explained:

‘John Thompson, a Black man who was friends with Philando Castile, won the Democratic-Farmer-Labor Party (DFL) nomination for the 67a District (St. Paul) seat for the Minnesota State House on Tuesday. On Saturday Thompson terrorized a group of white children in a residential neighborhood in the Minneapolis suburb of Hugo, using a sound system to scream obscenities at several teenage white girls standing in a nearby driveway watching a Black Lives Matter protest at the home of Minneapolis police union president Bob Kroll. Thompson screamed, “Come get your blue eyes medicine! Blue eyes ain’t shit!”’

Candidate John Thompson during his unhinged rant at a few young, white, females who were standing by their own garage.

Victims of the hateful rage and rhetoric of Mr/ Thompson.

You got the Grand Wizard living in your goddamn neighborhood! All the Klan exist in Hugo, Minnesota! And it’s right here!

Alpha News MN tweeted out the disturbing video of the clearly unhinged candidate:

John Thompson, who recently won his Primary for 67A in St. Paul, goes off and screams at neighborhood children, residents, and neighbors of Police Union Leader Bob Kroll.

I’m sorry, but this man, or any person who harbors so much hate in their hearts and is so easily triggered into, what appears to be an unhinged rage, should be no where near the levers of power.

Here is the bottom line, I would guess that 95% of Trump supporting Americans agree that judging people based on their race is wrong.  Are there some wackos out there who are stuck in the 1860’s?  Sure, there are always some bad people in every bunch.  However, the contempt, rage and hatred directed at anyone who is not a socialist or a POC, is down right scary.

If you live in Minnesota and are in the district this man is running for (67a,) I really hope you do not let him obtain a seat at the table where laws are being written.  People of this temperament belong no where near power … I don’t care what color they are, this mentality is down right dangerous.