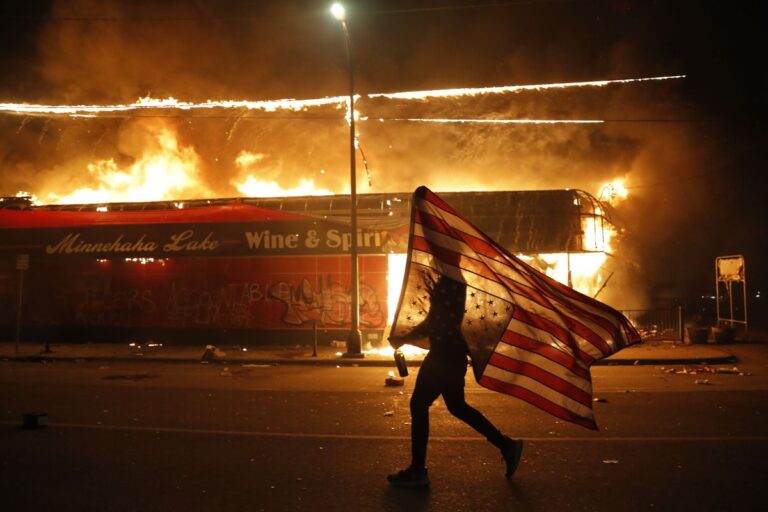 The Atlantic has published an op-ed by Shadi Hamid, a notorius Senior Fellow – Foreign Policy, Center for Middle East Policy, U.S. Relations with the Islamic World at the infamously Globalist Brookings Institute.  Hamid seems to try and intimidate ‘law and order’ Republicans into voting for Democratic candidate, Joe Biden.  This would almost  be funny, if the reasoning behind it were not so sinister.

Shadi argues, not that if Biden is elected he will restore the rule of law in blue cities, but rather threatens that, if Biden does not win, the left will refuse to respect the results of the election (sound familiar?)  This sounds to me like it is another way of saying the Democrats are really not interested in ‘democracy’ as they have claimed, but rather in one thing and one thing only: getting their way, obtaining power.

In an essay titled, “The Democrats May Not Be Able to Concede,” Shadi Hamid writes:

‘A loss by Joe Biden under these circumstances is the worst case not because Trump will destroy America (he can’t), but because it is the outcome most likely to undermine faith in democracy, resulting in more of the social unrest and street battles that cities including Portland, Oregon, and Seattle have seen in recent months.’

Did you catch that?  If their candidate loses, then ‘democracy’ (the will of the majority) will become illegitimate.  Just come out and say it Shadi, Democrats have no interest in ‘democracy,’ all they have interest in is their will being done.  He (accidentally?) implies that Democrats hate democracy so much, that if they do not get their desired outcome they will become (more) violent.  That’s terrorism bro, ‘using violence or intimidation to achieve a police aim.’

The gloagbist Hamid, goes on: ‘For this reason, strictly law-and-order Republicans who have responded in dismay to scenes of rioting and looting have an interest in Biden winning—even if they could never bring themselves to vote for him.’

I can not get over how brazen and nakedly authoritarian this is.  This is akin to a man breaking into your home and telling you to give him all your money without a fight, or he will smash your home, rape your wife, daughter and son, then take your money anyway.  He is, in my view, threatening voters with violence if they do not vote for the Chinese puppet and man of questionable mental acuity, Joe Biden.

The intimidator was not done yet:  ‘In presidential elections, once is a fluke; twice is a pattern. I struggle to imagine how, beyond utter shock, millions of Democrats will process a Trump victory.’   How they will process it?  What are they?  Children who were told there would be candy, yet no candy arrives?  For a group that talks to much about the importance of a ‘peaceful transition of power,’ they sure seem disinterested in the concept if they do not get their way.

He goes on: ‘A loss for Biden, after having been the clear favorite all summer, would provoke mass disillusion with electoral politics as a means of change—at a time when disillusion is already dangerously high. If Democrats can’t beat a candidate as unpopular as Trump during a devastating pandemic and a massive economic contraction, then are they even capable of winning presidential elections anymore? Democracy, after all, is supposed to self-correct after mistakes, particularly mistakes as egregious as electing Donald Trump—whose unfitness for the nation’s highest office makes itself apparent with almost every passing day.’

There it is, the arrogance of our author is on full display.  First of all, no one trust your polls, stop going to that well, you bled it dry in 2016 and look how that worked out for you.  As for Democracy ‘is supposed to self-correct after mistakes, particularly mistakes as egregious as electing Donald Trump,’ your naked elitism and just how far out of touch you are with everyday Americans is laughable.  Democracy DID work, after decades of the Uniparty controlling Washington and getting us in war after war, spending trillions upon trillions of dollars to lose thousands and thousands of lives, Americans had enough and we voted for REAL ‘change.’   We certainly to that change with Donald Trump.

The fact that the author either believes that Trump is such a failure, or is trying to gaslight the public into believing most people think this is true underscores the ivory tower he resides in.  Come down here to Florida, or any state in the union (apart from the smoldering cities) and talk to real Americans, the salt of the Earth, citizens.  They are more than happy to put up with Trump’s rough around the edges approach, because they knew he is doing what is best for America, not the money men pulling his strings.

The Atlantic is the globalist rag, owned in part by Steve Job’s radical leftist and elitist widow, which ran a piece that claimed President Trump called dead US soldiers ‘losers.’  Between this piece and the one trying to get people to think Trump does not respect the troops, one can see clearly just how out of touch the propaganda site is with the average, everyday American.

The left is desperate, but they are also out of touch, and those two together can be a deadly combination.