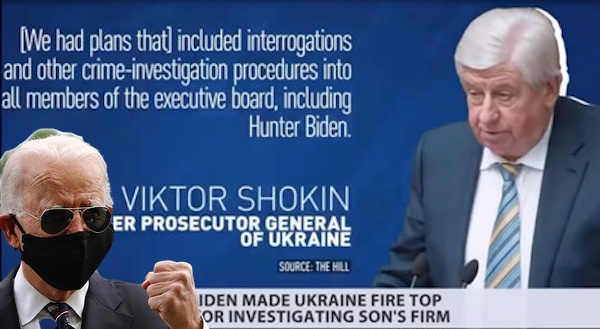 The most recent example comes from a newly leaked phone call between then-Vice President Joe Biden and Ukrainian President Petro Poroshenko that took place shortly after the 2016 presidential election.

Biden then told Poroshenko, “I don’t plan on going away. As a private citizen, I plan on staying deeply engaged in the endeavor that you have begun and we have begun.” In a matter of moments, Biden undermined the incoming administration, branded them as not knowing anything about Ukraine, and attempted to set up a foreign policy backchannel for himself after he left office as a private citizen, which could violate the Logan Act. (Go Deep)

Take a moment to think about the level and extent of Vice President Biden’s corrupt intent described by those two short paragraphs.

Biden was signaling that he had no intention of honoring the results of the American election.

He was engaging in the exact activity that he suggested prosecuting Trump’s incoming national security adviser of violating – the Logan Act, during the infamous January 5th, 2017 White House CYA meeting that included President Obama, high level DOJ and FBI operatives, as well as VP Biden.

Why was Biden so intent on undermining the relationship between incoming President Trump and Ukrainian President Petro Poroshenko?  Whatever Biden’s reason was to undermine the U.S.-Ukraine relationship, he was committing sedition.

(JusttheNews.com) [The] Treasury Department agency that polices financial threats such as money laundering flagged several foreign transactions to Hunter Biden-connected businesses as “suspicious” during the end of the Obama administration and the beginning of the Trump administration.

The concerns from the Financial Crimes Enforcement Network (FinCEN) were highlighted in Suspicious Activity Reports turned over to Senate committees over the last year in conjunction with investigations into the Russia and Ukraine scandals, according to several officials familiar with the evidence.

As those Senate investigations wind toward the issuance of their first official report later this month, an essential question has emerged: Did U.S. law enforcement or intelligence agencies do anything to determine if the money flowing to Vice President Joe Biden’s son posed any criminal or intelligence threats? Officials at Treasury, FBI and the Office of Director of National Intelligence declined comment…

Senate investigators have uncovered a network of Russian, Chinese, Ukrainian businesses that Hunter Biden and his business partners had become involved with while Hunter’s father Joe Biden was serving as Obama’s foreign policy point person.

Among those businesses that Hunter Biden became tethered to was Burisma Holdings, a Ukrainian gas firm with a long record of allegations of corruption.

Hunter was appointed to the board in 2014 and paid $1 million dollars after the company had been identified as engaging in corrupt activities.  The one million dollar annual compensation is three times the amount that the largest U.S. oil company, Exxon, pays its board members.

While the MSM,  so called ‘fact checkers’ and social media companies say this clip does not say what we think it says, we leave it for you to decide what Joe meant here:

« “Mayor John Cooper Is a Judas to This Town” – MUST SEE: Country Singer and Nashville Business Owner John Rich Warns Crooked Democrat Mayor a Class Action Lawsuit Is ComingLarry Klayman and Jerry Corsi continue their losing streak against Roger Stone and other targets of their frivolous harassment lawsuits »