On Sunday 9/20/2020 at approximately 2pm EST, Pete Santilli was suspended from Twitter for "Hateful content".  Santilli tweeted a former CNN reporter Reza Azlan who sent out a tweet suggesting the left would burn the place down if President Trump replaced Ruth Bader Ginsburg.  Read the actual message that Santilli was asked to delete.  Essentially, Pete Santilli reported the message to the authorities and advised Reza Aslan to read the law regarding Sedition --- U.S. Code 18 USC Section 2384 which calls for a 20 year prison sentence:

Twitter suspended Santilli and Reza Aslan's original threatening message remains on Twitter.  Yet another example of Twitter's complicity in promoting, advocating & enabling an organized, conspiracy to the overthrow of the U.S. Government.  Santilli states, "Twitter is playing an active part of the seditious conspiracy & should be held accountable by the Department of Justice, which is why I felt obligated to inform the authorities. This latest take down by Twitter is adding fuel to my argument."

SPECIAL NOTE:  Santilli is not phased one bit by the take down.  "I'm one of the first in independent media to be taken down by Silicon Valley marxists dating back to 2016.  In fact, I've been planning for this moment by taking almost all of my public commentary & news analysis to platforms that do not censor lawful speech.".   To find links to Pete's secure network of video, social media & websites, visit PeteSantilli.mobi. 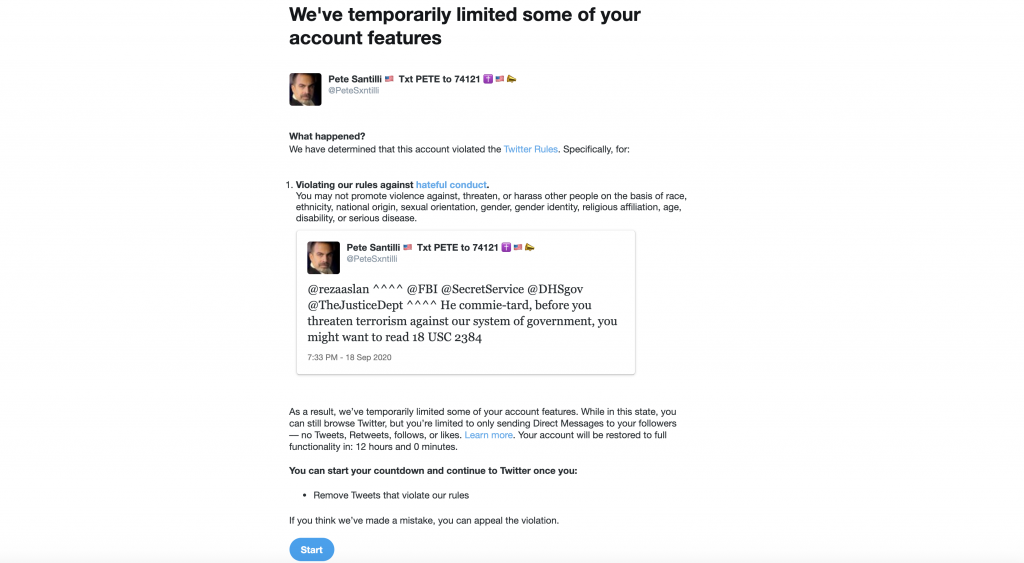 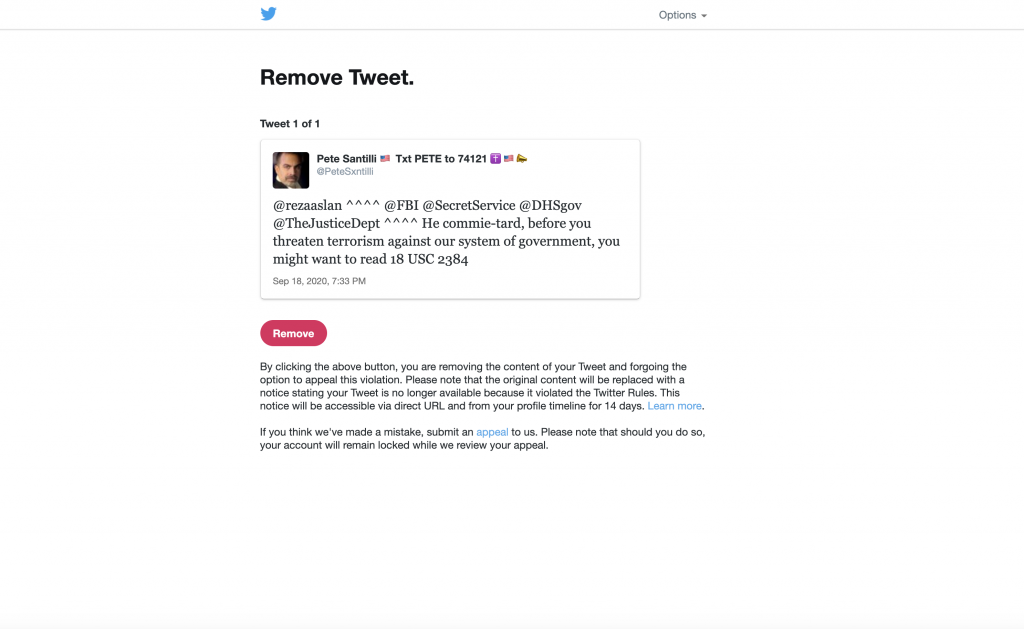 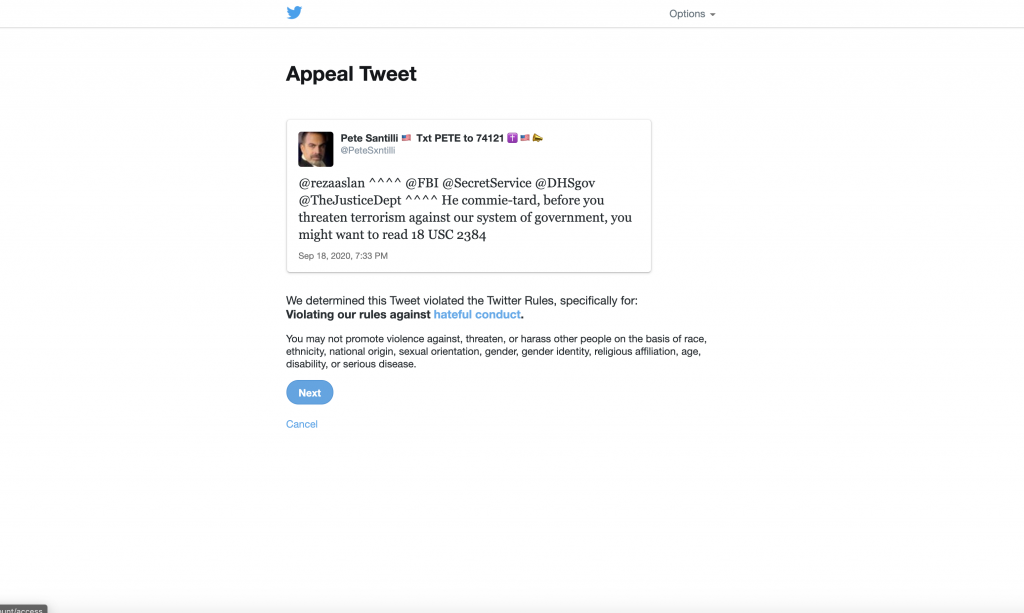 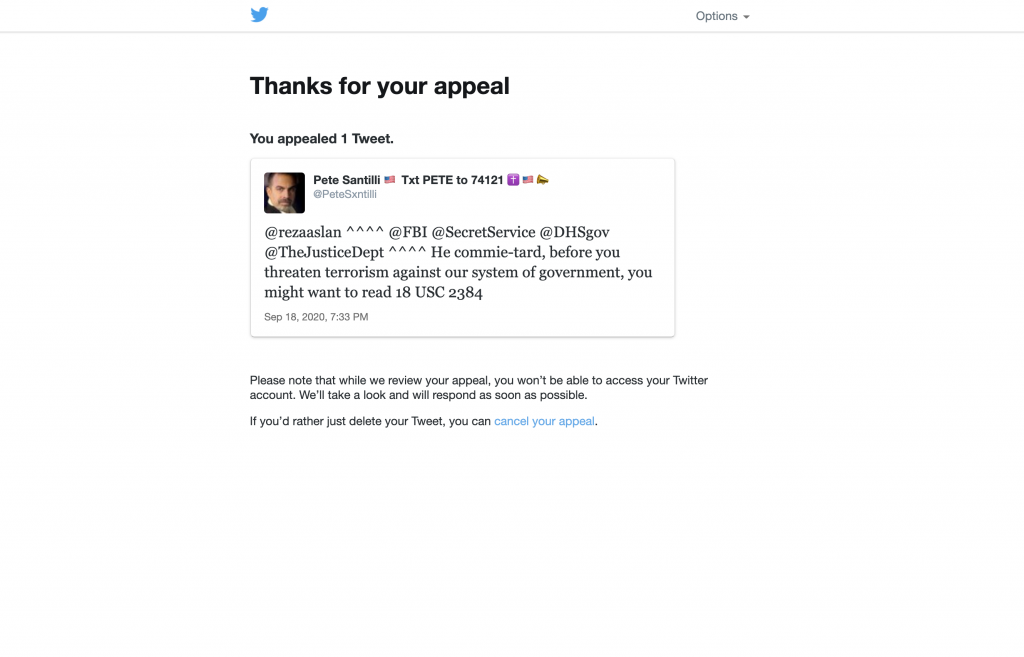 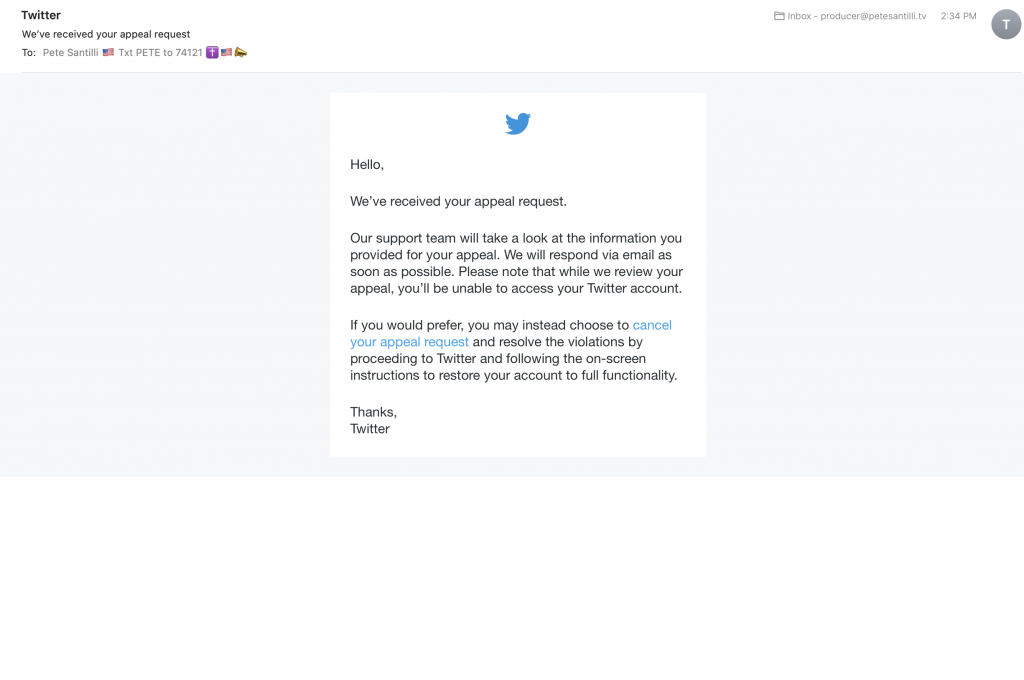 If McConnell jams someone through, which he will, there will be riots.


Meltdown City: Dems Threaten to ‘Burn It Down’ After RBG News, One Drinks on Live TV After McConnell Statement

The breaking news of the death of 87-year-old Supreme Court Justice Ruth Bader Ginsburg less than 2 months before the presidential election has sent Democrats and their allies in the mainstream media into an absolute tailspin.

It’s panic time for them on a massive scale. The unthinkable has happened: With Ginsburg’s passing, President Trump has another opportunity to nominate someone to the Supreme Court.

Even before Trump and Democratic presidential nominee Joe Biden had a chance to react publicly to the news, and before Senate Majority Leader Mitch McConnell made crystal clear that “President Trump’s nominee will receive a vote on the floor of the United States Senate”, the left’s eruptions were off the charts cray cray.

Some threatened to either “shut down” the country or “burn the entire f*cking thing down.” Supposed “journalists” warned of riots. Others called for a “revolution.” Another said a Trump SCOTUS nomination needed to be stopped “at all costs.” McConnell’s address was shared on Twitter and a march commenced to his house:

If McConnell jams someone through, which he will, there will be riots.


President Trump Responds to Barack Obama About the Supreme Court

Something tells me the violent BLM/Antifa riots we’ve seen this summer will be mere child’s play in comparison to what I fear is in store in the coming weeks.

As Joe Biden once infamously said, “gird your loins.” The chaos has only just begun.

« Joe Biden: Senate Should Not Vote on SCOTUS Nominee Before ElectionBiden Immediately Flees From Podium After Philadelphia Speech, Ignores Reporters Shouting Questions at Him (VIDEO) »