Video: Biden Flees The Podium, Hurls Insult At Reporter For Daring To Ask About His Son, Hunter Biden [Opinion] 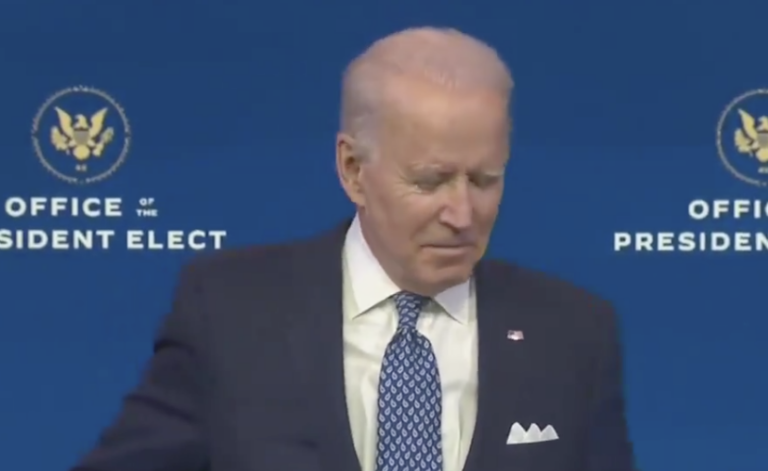 Opinion|  I have friends who are influencers on social media, they are ordinary people who have the … guts to speak out and call things as they see them.  They have good sized followings, but no where near what the, supposed incoming ‘President of the United States’ does.  I mean, Joe Biden got 80,000,000 votes, right?  More than even Barack Obama, the historic, first ‘black’ President of the USA.

Now, my buddies used to regularly get between 10-20,000 people viewing their live streams at a time … the man who got 80,000,000 votes for POTUS … well, here is a screenshot showing the number of current viewers, on his Twitter stream during part of his remarks today.

Yes, I am sure the number fluctuated, but 8,000 is nothing.  Bill Mitchel, before he was kicked off of Twitter, saw many times more viewers.  What does this mean?  As always, we will leave that for you to decide.

Screenshot Via The Gateway Pundit

According to The Gateway Pundit, and the video embedded below:

Joe Biden fled the podium as Peter Doocy shouted questions but Biden got so triggered that he stopped in his tracks, turned around and insulted Doocy.

“Do you still think the stories from the Fall about your son Hunter are Russian disinformation and a smear campaign like you said?” Doocy shouted as Biden brushed him off and fled from the lectern.

Because we don’t have a real media, Joe Biden was able to get away with dismissing the Hunter Biden laptop October surprise as “Russian disinformation.”

Biden once again dismissed the Hunter Biden scandal as Russian disinformation and responded, “Yes! Yes! You’re a one-horse pony! I tell ya!”’

"God love you, man. You're a one-horse pony" — Biden to @pdoocy of Fox News as Doocy asks him about Hunter Biden while he walks off the stage pic.twitter.com/GfF6ZsRL21

It sure seems that ‘The Big Guy’ can not even handle a simple question from the press that is not a pre arranged PR exercise.  Now imagine for a moment if Biden ever had to face the kind of hate and vitriol that President Trump has endured from the ‘media’ for the last 4 years.  Biden wouldn’t not last a second, IMHO.

Pray for our nation as we head into Christmas.  Now, more than ever before, America needs a miracle if we are going to make it out of this in once piece.

The post Video: Biden Flees The Podium, Hurls Insult At Reporter For Daring To Ask About His Son, Hunter Biden [Opinion] appeared first on The Beltway Report.