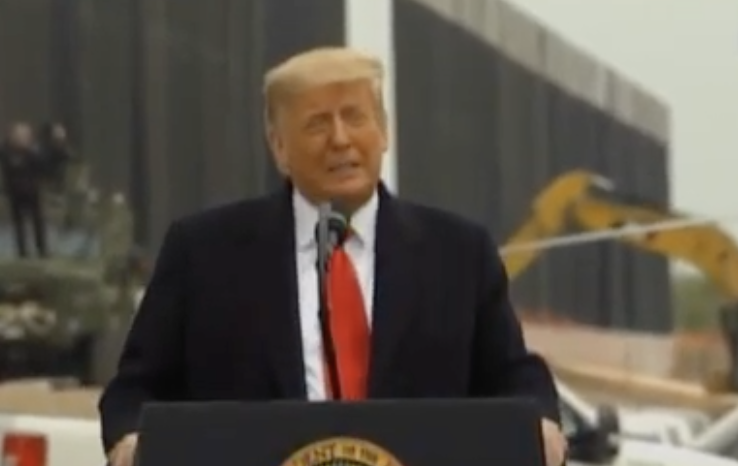 It has been some time since we have seen President Trump out in public, making a speech.

There have been thousands of Q styled theories floating around, none of which I can speak to the validity of.

Some people say that Trump has them right where they want them, others say Trump is about to enact the Insurrection Act, others claim he already has.

Others yet claim that on Inauguration Day most of the Swamp creatures will be in one place and that is when Trump will use the military to arrest the traitors.

I know you probably do not want to heat this, but I do not think that is going to happen.  I have a feeling Trump is most concerned with how he is going to survive his attempt to save this nation from the grips of globalist and the CCP.

Trump poked the red, communist, bear and the bear swatted back., with the help of the Democrat Party the the globalist corporations.

Now, Trump is back in the spotlight and making his moves.

The border wall was one of President Trump’s promises to the American people. Open-border Democrats and Republicans fought him every step of the way with the project. Despite this President Trump was able to complete 450 miles on the US border in four years.

Over 753,000 were watching his speech on Right Side Broadcasting Network.

This was his first speech since the Electoral College vote last week.


It also was the first time President Trump suggested Joe Biden will become president next week.

President Trump: Freedom of speech is under assault like never before. The 25th Amendment is zero risk to me. But it will come back to bite Joe Biden and the Biden administration. As the expression goes, be careful what you wish for.

You can watch Trump’s entire speech here, thanks to Right Side Broadcasting.

Don’t worry patriots, if God be for us, but who could be against us?  We shall in the in the long run, so long as you NEVER give up!