McConnell To End Trump’s Presidency With Knife In The Back 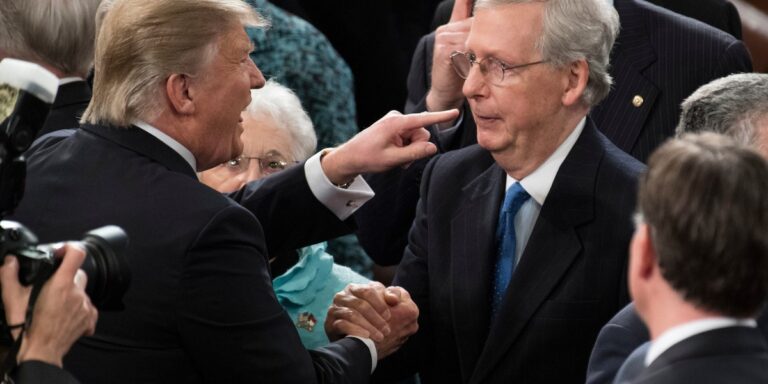 Ladies and Gentlemen, I present to you, the end of the Republican Party, and with it half of the Democrats Party (seeing as they really are just two mouth pieces for the same monied interests.

Last week President Donald Trump spoke to over 500,000 supporters at the Stop the Steal rally in Washington DC.

The rally was the last-ditch attempt to investigate the alleged discrepancies in the results of the 2020 presidential election.

During his speech, President Trump made it extremely clear that he did not was violence, but rather peace and rather than physical assault, have the crowd’s sheer size make their point, stating:

“I know that everyone here will soon be walking over the Capitol Building to peacefully and patriotically make your voices heard.”

The toilet ‘Paper of Record’ tweeted:

‘NEW: McConnell believes Trump committed impeachable offenses, believes the attack on Capitol gives Rs a chance to purge the president and… McCarthy has asked colleagues if he should urge Trump to resign, is open to a censure ‘

McCarthy has asked colleagues if he should urge Trump to resign, is open to a censure

If the Republicans in the Senate vote to impeach Trump you can expect a huge political realignment in this country … that is, IF voting even counts or matters anymore.

Now that the Grand Ol’ Party is curtain and its stalwarts, McConnell, Graham and company have no credibility and clearly no integrity, what do you think is next in store for the Conservative movement?

I have a feeling we are going to see a Trump/MAGA party take on and eventually swallow the Republican Party.

That is IF the Democrats to do not law all political parties except their own.  Don’t laugh, I have a feeling that we are way closer to this outcome than we ever have been before.

The post McConnell To End Trump’s Presidency With Knife In The Back appeared first on The Beltway Report.